St. Mark’s is well known within the community for its robust sports and athletic program. The program develops physical skills, character, and maturity through education and competition.

LOWER SCHOOL
Beginning in Pre-K, our students are introduced to physical education through age-appropriate games, which teach sport-specific skills. As students progress through lower school, they are exposed to healthy competition in which character and sportsmanship are emphasized. With the goal of developing coordination, agility, and flexibility, St. Mark’s veteran PE staff administers the Presidential Physical Fitness Program. Personal improvement, rather than peer competition, is stressed and applauded. Those children seeking additional athletic opportunities participate in an after-school intramural sports program. 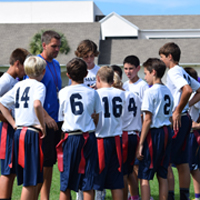 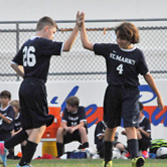 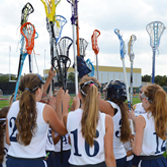 MIDDLE SCHOOL
In addition to physical education classes, middle school students can participate in interscholastic sports. Representing St. Mark’s in the Palm Beach Independent Schools Athletic Conference, students compete against The Benjamin School, Jupiter Christian School, The King’s Academy, Meyer Academy, Palm Beach Day Academy, and Rosarian Academy. Led by coaches with high school and collegiate coaching experience, our middle school athletes are taught strategy and skills in a team environment that emphasizes sportsmanship and healthy competition. We want our children to understand the value of teamwork and how to win and lose with grace.

A favorite tradition at St. Mark’s is to honor a championship team in chapel at the end of their season. The team presents their trophy to the head of school. Thanks to the strength of our athletic program, we have been able to practice this tradition regularly! In the 2013-2014 school year, the girls’ volleyball team was undefeated for the season and won the conference championship for the third year in a row. The girls’ lacrosse team was also undefeated and won their conference championship for the second consecutive year. The boys flag football, basketball, and lacrosse teams were league champions in the 2012-2013 school year.